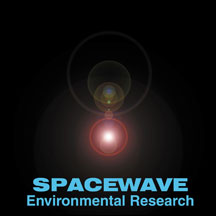 Environmental Research is the debut CD from Spacewave, the primary music vehicle of long-time engineer, producer, and artist John Palmer. A rare document of early Spacewave tracks for fans of space and ambient drone, this project was started in September 2000 and, after several intervening life changes including a studio move, was finally completed in November 2002. Featuring the one-hour tone poem Environmental Research and the more rhythmic Andro-Media, Spacewave establishes itself in the ambient electronica genre.