The maddest story ever told 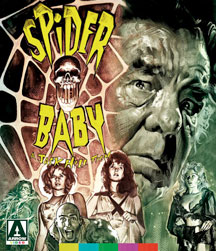 The credits dub this "the maddest story ever told", a promise that's well on the way to being fulfilled in the opening scene alone, when Virginia traps and kills a hapless deliveryman in her makeshift web. She's one of three siblings who suffer from a unique genetic disorder that causes them to regress back to childhood, while retaining the physical strength and sexual maturity of adults. Lon Chaney Jr gave one of his most memorable late performances as Bruno, their guardian and protector, who has managed to cover up their crimes until two distant relatives lay claim to their house. When they insist on moving in, Bruno has to cross his fingers and hope that the 'children' behave towards their new guests... This was the first solo feature by Jack Hill, whom Quentin Tarantino dubbed "the Howard Hawks of exploitation filmmaking", and it remains one of his wildest and weirdest.

Arrow delivers another top-notch cult classic release. If you like your horror flicks a little funny and a little sexy and a lot twisted, then Spider Baby is the flick for you. Highly Recommended.

A happy coincidence of fun and fright, guaranteed to entertain and amuse.

The film looks as healthy and vibrant as one would expect it to look on Blu-ray.

Spider Baby evokes an odd sense of nostalgia for a bygone era of movies... Arrow Video has done an excellent job with this disc

A near perfect blend of gothic horror and black humour, Spider Baby is certainly one of the weirdest flicks to come out of the post-Psycho early '60s

The technical merits of these Arrow discs are, as expected, superb. Supplements are very entertaining. Recommended.