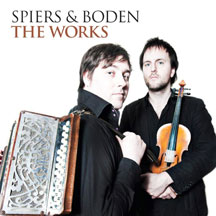 Bellowhead founding members John Spiers and Jon Boden mark their 10th anniversary as a recording duo with the release of 'The Works'. Featuring a stellar supporting cast that includes Martin Carthy, Eliza Carthy, Andy Cutting, Maddy Prior and Martin Simpson among other folk luminaries, the album revisits a selection of the most significant songs and tunes that have accompanied them through the last decade.