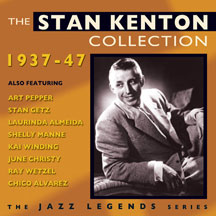 This is part of a mini-series on our competitively priced budget label Fabulous under the banner of Jazz Legends, presenting some of great and influential names of jazz, with recordings drawn from the classic era of the genre's development between 1920 and 1950. Stan Kenton was one of the most innovative band leaders of the swing era and beyond, developing what he called "progressive jazz" in a concert orchestra format during a time when many big bands were failing. This collection traces the first decade of his recording career beginning with his days as a swing era pianist and his early days as a bandleader, leading through to the time when he really hit the big time in the late '40s. As such it is a fascinating journey through the evolution of his compositions, and the increasing complexity and sophistication of his orchestra's arrangements to the point around 1947 where he had developed a truly radical and challenging approach to big band music. Unlike many of the other artists in our jazz legends series, his work did not necessarily involve performing with other leading contemporaries within the genre, but his was a distinctive and single-minded strand of activity, and the collection makes for highly entertaining and enlightening listening.