Steel Vengeance - Call Off The Dogs

Re-release of a debut album by the US' heavy-metal band. Remastered edition includes 2 bonus tracks 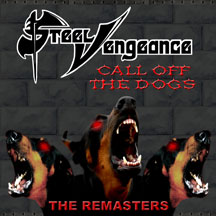 Remastered edition of the band's debut album from 1985. American band Steel Vengeance was formed in the early 80's by the guitarist and producer Michael Wickstrom. The band is in the hard rock and heavy metal genre and most often is compared to Judas Priest and Iron Maiden. The band has had numerous accolades throughout the 80's such as beating out KISS, Twisted Sister, and various other bands for the highly-coveted "Album of the Month" from France's Enfer Magazine (for their debut album "Call of the Dogs") and numerous other magazine awards. The band's follow-up release "Second Offense" (1986) scored lots of acclaim as did their third release "Prisoners" (1988). In the 90s the band had a line-up change and relocated to Los Angeles and released their fourth "Never Lettin' Go"(1990) and fifth album "Live Among the Dead" (1991). The material is remastered using tube technology. Digipak edition includes 2 bonus tracks - audio and video!