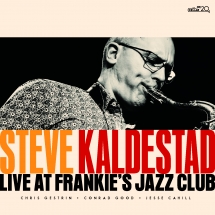 Since moving to Vancouver in 2008, Steve Kaldestad has become one of the most in-demand saxophonists on the scene, performing as a sideman with Jesse Cahill's Nightcrawlers, Jodi Proznick's quartet, and many other groups. Live at Frankie's is Kaldestad's 4th CD on the Cellar Live label and is the next album in a steady stream of releases that enjoyed great acclaim. This includes Straight Up featuring the Mike LeDonne Trio and New York Afternoon with the Renee Rosnes Trio. The new album sees Kaldestad team up with his quartet that consists of Chris Gestrin, Conrad Good and Jesse Cahill. These are 4 of the most burning jazz musicians in Canada, who bring a fire and energy to their interpretations of lesser known standards and 2 Kaldestad originals, that captivates the listener from the first song. This quartet knows how to pick songs - the recordings on this album are perhaps lesser known standards but are gems of jazz history like Bolivia by Cedar Walton and Con Alma from Dizzy Gillespie, that provide an incredible vehicle for improvisation. This recording succeeds in continuing the lineage of Cellar Live releases that were recorded in the early years at the Jazz Cellar nightclub, and now transplanted to Frankie's Jazz Club in downtown Vancouver.

With a robust tone and swinging, rhythmic propulsion, his lines unwind fluidly, extending into the altissimo register without the clichéd torture of so many modernists. His solos are intelligent, but accessible, in part because of their tasty blues spicing

I don't know if Kaldestad will submit Straight Up for Juno Award (traditional jazz category) consideration later this year, but if he does, it would deserve to be one of the front-runners.