The velvety voice of Steve Maddock shows a new side belting out the blues on 10 blues drenched tunes! 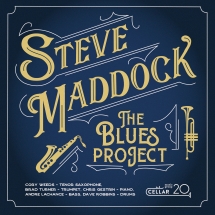 This project began in 2018, when Cory Weeds pitched an idea to me for a Joe Williams tribute show at Frankie's Jazz Club in Vancouver. Williams is arguably one of the greatest jazz & blues singers we've ever had. In March 2019, we played two club dates, calling the show "Nothin' But the Blues: A Tribute to Joe Williams". It was so well received, that we immediately began planning a follow-up gig. We decided to expand our theme, still travelling a blues path, but drawing material from other artists. Cory was an invaluable source, hipping me to such names as Eddie "Cleanhead" Vinson, Jimmy Witherspoon, David Peaston, and Billie Poole. In September 2019, we played our second show at Frankie's: "Steve Maddock Sextet: The Blues Project". Cory suggested we make a record for his Cellar Music label, so we invited our friend Bill Coon, a wonderful musician & composer, to co-produce. After several challenges and delays due to the global pandemic, we finally got the six of us into the studio in December, 2020.

There is little doubt that Steve Maddock is one of Canada's finest jazz vocalists.

Kudos to Steve Maddock! For he has certainly produced one of the outstanding male jazz vocal albums of the year.

The Love Supreme statement (in There Is No Greater Love) is classic. Memory Cafe is also great. It is a pleasure to hear a recording using original lyrics and modern jazz arrangements without pandering to a listening audience or going 'out' to show how hi