An iconic American release in the ambient and electronic genres. Best seller remastered for next 30 Years of Silence. 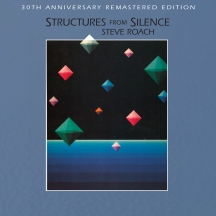 Pitchfork’s Top-40 Best Ambient Albums of All Time, May 2017: “…contemplative bliss, full of purring drones and high notes that shimmer and fade. Like a desert mirage, these structures hover forever at the horizon, an oasis from the din surrounding it.”

Structures From Silence’s breathing, suspended embrace of atmospheres and serene melodies instantly struck a chord with listeners in 1984; the album continues to reiterate its timeless resonations with new listeners today. For the 30th anniversary, Roach went back to the original analog mixes for a 24/96k remaster that reveals luscious quality and subtle tonal detail not heard since he was in the studio.

On this landmark recording of gentle proportions, the three long-form tracks were the birth of something new: an original and pure statement striking a balance between diaphanous and gentle, deep and reflective. The listening experience evokes a sense of silence within the music as well as the space between the chords. It expresses the breath of life and offers a meditation on delicate strands of subtle awareness.

Thirty years later, Structures From Silence remains an iconic American release in the ambient and electronic genres. It’s a well-respected soundtrack for contemplation, relaxation, meditation, and creativity. Emotional, powerful, and enriching, it is a living example of the true healing quality that music can hold.

FACTmag: “One of the most important ambient albums ever crafted…. its enduring influence has been unmistakably visible in the three decades since its release. It has never been more relevant.”

With a beautiful new audio transfer that perfectly reveals the silence within, this release sets the tone for the next 30 years of silence.