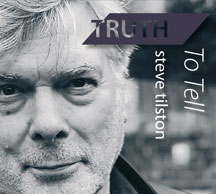 'Truth To Tell', the new eagerly awaited solo album from Steve Tilston, represents yet another musical tour de force from one of the UKs most respected songsmiths. Steve's songs have often been suffused with a sense of history. In Truth to Tell he captures and recollects people, places and personal experiences with a vivid clarity. Yet this is no mere autobiography. Album Of The Month with Folk Radio UK and there was also a news feature in last issue of SONGLINES (re: Danny Collins movie and the upcoming CD), plus fRoots (last issue). Cuttings of both attached. Steve Tilston 'Danny Collins' features in Guardian, Mirror, Express, Radio Times, and the like, should you need them, too. Worth reminding the label manager about Al Pacino and Steve being interviewed in a joint interview by Andy Kershaw on 'The One Show' (BBC 1 TV). Insightful lyrics, ravishing melodies and deft guitar work combine to deliver an assured album from an artist at the top of his game, each and every song standing firm, assured and fully realised in its own right - truths told and at the same time telling.