The Stray Cats are on the Prowl! Limited edition! 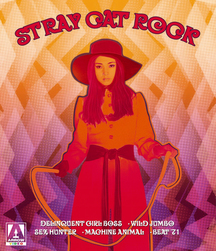 The Stray Cat Rock series stars Meiko Kaji (Lady Snowblood, Blind Woman's Curse) who with these five films began her reign as the badass action queen of the era. In these five tales of rebellious youth she stars alongside the gorgeous Bunjaku Han (Love Letter) and Tatsuya Fuji (In the Realm of the Senses). In Delinquent Girl Boss, a girl gang go up against criminal organisation the Seiyu Group, where following a fixed boxing match blood is shed and friendships are tested. In Wild Jumbo, Kaji and the gang get involved in a kidnapping and the robbery of a religious organisation. In Sex Hunter Kaji's girl gang go up against The Eagles, a group led by Fuji where sex and violence erupt over the treatment of 'half-breeds'. In Machine Animal gang rivalry is once again the focus with two gangs pursuing some LSD pushers looking to move a big score. The series swansong, Beat '71, sees Kaji framed and sent to prison by her boyfriend's father and with the help of some hippies she strives to be re-united. Directed by genre veterans Yasuharu Hasebe (Massacre Gun, Retaliation) and Toshiya Fujita (Lady Snowblood) the films feature a psychedelic mix of girl gangs, bikers, sex, drugs and rock and roll with plenty of ass-kicking to boot, all captured in a delirious mash-up of pop aesthetics including split screens, freeze frames, injections of color, frenetic editing and dizzying angles, making these films a riotous joy from beginning to end.

The five motion pictures that make up the Stray Cat Rock cycle were inspired by the late '60s counterculture. Amidst a backdrop of psychedelic imagery, the characters represent Japan's wayward youth, juvenile delinquents hell-bent on living life on their own terms, stealing, drugging, and fighting along the way.

This collection should be essential for fans of Japanese cinema as well as those of 'drive-in' type movies of this era.

The sauciest, fashion-savviest girl gang flick ever committed to celluloid!

...Having all five of the Stray Cat Rock films in one release is quite a sweet treat. Each of the films have been cleaned up and have received admirable transfers that bring out much more detail and naturalized colors than any previous releases have.

An off-the-cuff cocktail of the fermenting youth scene stirred with various genre tropes and shaken with violence.