The icons of neo-rockabilly, captured at their best in two amazing '81 and '83 Rockpalast concerts: young, raw and wild! 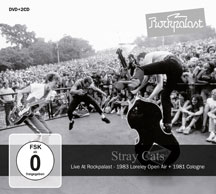 Every era has its heroes and every scene has its legends. The 80"s had the Stray Cats and today they are the indisputable icons of neo-rockabilly. When the US trio stormed the top of the charts in their adopted country of England, punk still reigned supreme in the United Kingdom. But Brian Setzer, Slim Jim Phantom and Lee Rocker brought that certain something that the mo-hawked men also had: a feeling for danger and rebellion. Impressive footage of this time includes two performances in Germany: one in 1981 in Cologne and one in 1983 at the Loreley. These are genuine recordings that make the trio's sound still accessible today. Both concerts are released here for the first time in the best possible quality and with a superb sound on DVD and CD. The Stray Cats will come to life at home just as they were at their best. Brian Setzer, today a "statesman" of rockabilly and multiple platinum seller, works passionately as he struck the strings on the stage of the Cologne Satory Halls. Of course the Stray Cats aren't only made up of Setzer with his phenomenal guitar playing and his powerful vocals. Lee Rocker and Slim Jim Phantom are also responsible for the band's special sound. Phantom's simple drumming became an example for rockabilly drummers worldwide and his wild screams in the songs belong to Stray Cats exactly as Brian Setzer's licks and Lee Rocker's clattering bass do. He treated his instrument like a lover or like monkeybars on which he did gymnastics. Rocker's tone and drive gave the band the foundation to build on. The bad boy attitude was internalized by the "street cats." Both concerts also underline how rapidly Stray Cats" career progressed. Between both recordings were full worlds. In 1981 they were young rockers and by 1983 they had become full-fledged rock stars. Today we enjoy classics such as "Stray Cat Strut," "Runaway Boys," "Rumble in Brighton," and "Rock This Town" like they will never be heard live again with two concert recordings for eternity.

Recorded by WDR, the performances feature the Stray Cats still on the rise and still a little rough around the edges

A fine document of an incredible band at the height of its power.

If you're a Stray Cats fan, this is obviously an absolute must have collection