Striding Into The Wind 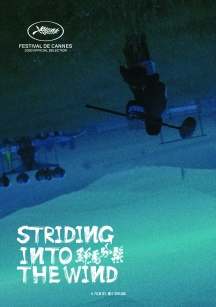 Film school student Kun graduates into a real-world that moves too fast to care about his auteur aspirations and sound recording skills. Yearning for an escape away from Beijing's grinding survival races, he sets off for a film shoot in Inner Mongolia's lush grasslands, where amusing man-made spectacles and unforgettable lessons await him. With three Cannes official selections under his belt at the age of 30, writer-director Wei Shujun is an unstoppable force rising from the Chinese indie film scene. In the debut inspired by his real-life experience, he leisurely delivers sharp observations of the embarrassments surrounding film education and indie filmmaking in a money-oriented society with witty humor.

Striding Into the Wind is easily one of the best Chinese indie or arthouse films of the last few years, and is all the better for its personal feel and its avoidance of the clichés of the form. Wei Shujun does a great job of presenting a relatable picture of directionless youth and of his experiences in the industry, and as a debut feature, the film is invigorating and entertaining from start to finish.

Jiehong Wang's strong cinematography ensures immersion in the visual aspect of the movie, with his lively landscapes and seamless adaptability a real highlight of the production.

The film is elegantly dry-humoured about the film-making game... it should also appeal to admirers of the hangdog comic school of Jarmusch, Kaurismäki etc...

The film made me feel very melancholy, as we follow Kun, a struggling sound recordist through film school. Stand out moments in the film include a really accurate portrayal of how the role of sound man is pushed to one side in film school.

a deliriously entertaining and wryly funny snapshot of contemporary youth in China...This visually striking project in its elegance yet jocular idiosyncrasy marks a stellar debut from Shujun.