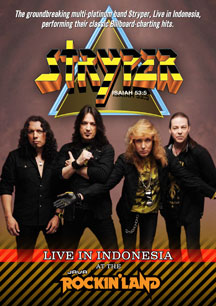 The multi-platinum heavy metal band Stryper, live at the Java Rockin' Land festival in Indonesia. Recorded in front of an enthusiastic crowd in 2010, this is the definitive Stryper DVD. Celebrating almost 30 years of incredible melodies and musicianship, Live In Indonesia features hits and rarities delivered in impeccable sound and video.

The 2010 concert film features the group delivering their irresistible mix of enormous choruses and biting guitars, to a crowd lapping up every single note.

Gone is the band's trademark yellow and black-striped spandex that made them look like Biblical bumblebees... What's left is a supremely talented band with a knack for songwriting, a flair for showmanship, and a message to sustain them, even if MTV doesn't play their videos anymore.

Without a doubt, STRYPER is one of the top Christian rock bands of all time, and certainly the most celebrated Christian metal band of all time.