Are you eating it ...or is it eating you? 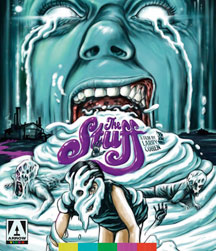 Are you eating it ...or is it eating you? The Stuff is the new dessert taking supermarket shelves by storm. It's delicious, low in calories and - better still - doesn't stain the family carpet... What's not to like?! Well, for a start it has a life of its own, and we're not talking friendly live bacteria... Young Jason seems to be the only one who doesn't love The Stuff - in fact he won't go anywhere near it, after having seen the pudding crawling around the fridge one night. What's more, everyone who eats The Stuff has started acting really weird... Now, teaming up with wise-cracking industrial saboteur "Mo", Jason must put a stop to The Stuff and the organisation behind it or face a gooey, gloopy demise. Coming courtesy of horror auteur Larry Cohen (director of the It's Alive series and scribe behind the Maniac Cop trilogy), The Stuff is a titillating treat for the taste-buds which blends elements of films such as Street Trash with the straight-up B-movie flavour of The Blob. So grab a spoon and dig on into The Stuff - the taste that delivers... much more than you bargained for!

The movie looks and sounds pristine... Once you watch this, you'll definitely want some mo'.

Larry Cohen's The Stuff has more on its mind than the average low-budget horror movie. It gets points for that. Fans of the movie should go ahead and pick it up.

Fabulously entertaining paranoid thriller... This new transfer is just wonderful and there are a host of extras.