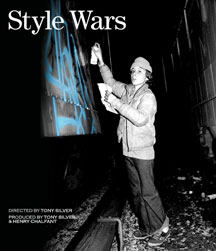 When director Tony Silver and co-producer Henry Chalfant delivered the broadcast version of their prize-winning film to PBS in 1983, the world received its first full immersion in the phenomenon that had taken over New York City. The urban landscape was physically transformed by graffiti artists who invented a new visual language to express both their individuality, and the voice of their community. In STYLE WARS, New York's ramshackle subway system is their public playground, battleground, and spectacular artistic canvas. As MC's, DJ's and B-boys rock the city with new sounds and new moves, we see street corner breakdance battles turn into performance art.

Tony Silver's 1983 documentary Style Wars portrays decades of social inequities and American art and culture through the prism of hip-hop.

—The Chronicle of Higher Education

Anybody who wants to understand what hip hop is all about needs to see a movie called Style Wars.

The Holy Grail of hip-hop movies.

Style Wars--in all its restored beauty--illuminates the color scheme of the bombs and highlights the brilliancy of street art in all its evolving glory.

The people behind this set took their time in crafting a package with extreme care... Rarely do the bonus features provide this much context and help to tell their own story.