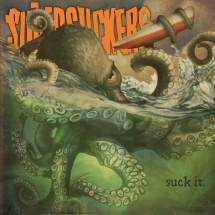 "We've finally become the band that we've always threatened to be," says singer-bassist Eddie Spaghetti, calling, as ever, from the road. With the Supersucker odometer clicking on three decades this very year, the self-proclaimed Greatest Rock n' Roll Band in the World is marking the occasion with a loud, resounding Suck It. Off the blocks, this 12th studio album from the band showcases a ruthless, get-it-done trio that sounds rebuilt from Motorhead parts, with a singer-bassist transmuting Lemmy's mojo to rasp "You said to grab it/Just hook or stab it/And now I gotta have it - All of the time." "Once we tapped into that vibe, we really ran with it," Eddie says of "All the Time," which opens an album he and core 'Suckers Marty Chandler (guitar) and drummer Chris Von Streicher (drums) recorded early this year at Bismeaux Studio in Austin, TX, cutting all ten tracks in four days. "And it sounds great," says Eddie. "There's not a lick I wish we could have back."

Another solid Supersuckers album, proving that it's going to take more than a bout of cancer to stop these guys from doing what they were put on this earth for--tearing down the house for insurgent country and raucous rock and rollers until the devil calls them home.