When the son of a woman is murdered by neo-Nazi surf punks in the post-apocalyptic future, his Mama hunts them down for some bloodthirsty revenge. 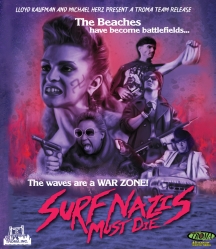 An earthquake leaves the California coastline in ruins and reduces the beaches to a state of chaos. A group of neo-Nazis led by Adolf (Brenner), the self-proclaimed "Führer of the new beach", takes advantage of the resulting chaos by fighting off several rival surfer gangs to seize control of the beaches. Meanwhile, an African American oil well worker named Leroy (Harden) is killed by the surf Nazis while jogging on the beach. Leroy's mother, "Mama" Washington (Neely), devastated by the loss of her son, vows revenge. After arming herself with a handgun and grenades, she breaks out of her retirement home and exacts vengeance on the Surf Nazis.

It does have some fun moments and is without question watchable.

The cult classic "Surf Nazis Must Die!" (1987) has been newly restored in high definition.

The Blu-ray presents the film in widescreen for the first time, and the movie has never looked or sounded better.

The 1080p restoration is a big improvement over the DVD released in the late 90’s and a nice lineup of bonus features is also included.

It’s cheapo exploitation, but this new Blu-ray is loaded meaning fans will want to pick it up.

In closing, Surf Nazis Must Die is a brilliantly conceived beach holocaust drama/revenge thriller that you can enjoy with the entire family.

Don’t miss: Extras include an introduction by Lloyd Kaufman,  interviews with director Peter George and producer Robin Tinell, deleted scenes, scenes from the Tromaville Café and The “Soul” of Troma featurettes, a Projection Booth Podcast with George and promos for other Troma features.

Don’t miss: Extras include an introduction by Lloyd Kaufman,  interviews with director Peter George and producer Robin Tinell, deleted scenes, scenes from the Tromaville Café and The “Soul” of Troma featurettes, a Projection Booth Podcast with George and promos for other Troma features.

George and editor Craig A. Colton work their magic on a remarkable cutting room performance with splicing in Hawaiian surfing footage with the Huntington Beach narrative in a near seamless manner.

Die-hards know what to expect…lots of blood, sex, nudity and good natured immaturity, generally presented with a big middle finger to the PC crowd.

"Surf Nazis" is, like most of Troma's films, an intentional goof that revels inits technical non-proficiencies and gleefully toes the line between offensive and look-at-my-chewed-up-food silliness.

It would be perfect material to spoof for Mystery Science Theater 3000.

All of this is of course intercut with some really gnarly surfing footage that seems to be sourced by the film's creators and not from pre-recorded footage, however, I cannot confirm that.

Possibly one of Troma’s best known mainstream films (from the title alone), it’s a must own for any horror/cult film collector to have in their collection.

Troma fans will definitely get a kick out seeing Mama Washington tear loose during the climax and enjoy the many entertaining bonuses also included on the disc.

Surf Nazis Must Die is the courageous saga of a mother’s undying devotion and quest for justice becomes a tidal wave of action and destruction!

Honestly, the best special feature here is the introduction of the film by Lloyd Kaufman that plays the moment you enter the disc.

Delightfully absurd, completely wrong, and undeniably enjoyable, Surf Nazis Must Die! is a must-see for those that like to take it sleazy!

But it doesn’t really have a focus, but then again, Mama Washington is such a great character and I love every moment that she’s on screen.