SWANS - Where Does A Body End? Deluxe Edition

Where Does a Body End? is the definite film about the band SWANS. 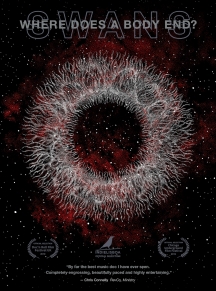 Where Does a Body End? is an intimate portrait of the band SWANS, from their roots as a brutal, confrontational post-punk band that emerged from the same early 1980s era NYC that gave us Sonic Youth (and, somehow, Madonna) through their ill-fated bid at mainstream success in the 90s indie-rock gold rush, through breakups and chaos (on and offstage) to their odds-defying current status as one of the most accomplished and ambitious bands in the world, one whose concerts are more like ecstatic rituals than nostalgic trips back through their most popular songs. SWANS has always been a collection of singular performers, but there's been one constant since its formation in 1982--singer, songwriter Michael Gira. With unfettered access to hundreds of hours of Gira/SWANS archives of never-seen-before recordings, videos, and photographs, the film brings us along the path they needed to carve for themselves. The film is many things, a musical history, a time-capsule, a tour diary, a concert film, but mostly it's the story of a life in the arts, frequently difficult, spanning decades without a safety net, creating the work because Gira says "What else am I going to do?" As bandmate Thor Harris notes, "Michael is not a fearless person, but he is a fearless artist."

There really is no other force of music like Swans. Swans stand alone, integral, drenched in pathos. A band to end all bands.

Director Marco Porsia delivers an intense, comprehensive documentary of the band that is every bit as massive as their recordings. That he captured their many faces to this extent is an astounding achievement in its own right, but then to build something both captivating and informative from such split personalities is pure cinematic magic.

A comprehensive portrait of Gira and his musical endeavors... Fans should love this raw exploration of their legacy.

There is considerable opportunity to see how Swans' performances have developed over time, with plenty of variously brutal, abrasive, shamanistic and ecstatic concert footage.

Directed by Marco Porsia, this movie is as good as it gets, especially if you've ever surrendered to the pummel of Gira and co and want to take the experience home with you. This extremely rare early footage is nothing short of a revelation.

Heady concert footage is seamlessly stitched together with remarkably insightful interviews. Porsia had access to a mountain of archival material an in sorting through it all, he made really smart choices. A-

Where Does a Body End is an often ingratiating and even provocative biography. Talking heads run rampant here, but the good news is most of them have interesting things to say. Recommended