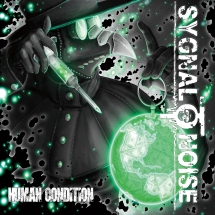 Sygnal To Noise, a melodic hard rock band, was founded in February of 2013 by frontman, Coopa, a singer/songwriter and veteran of the New England music scene. Their mission is to help bring rock 'n' roll to modern fans and back to its former glory on mainstream radio once again. Sygnal To Noise has been greatly inspired and influenced by bands like Queen, KISS, Alice Cooper and David Bowie, for their showmanship and visuals with a blend of such bands as Stone Temple Pilots, Alice In Chains, Soundgarden, and Pearl Jam for their songwriting and vocal styles. Having the perfect blend of creativity and diverse talent; Breanne ( Breezy ) Powell on Bass, Christopher Skehan on guitar, Dave Pike on guitar and T808 on drums; and their combined creative process, passion and vision is what pushes their focus and drive for the future of rock 'n' roll. The band has a large interactive visual live performance, with visual art, as well as cameras and stage effects, to help immerse the audience into the music. This combination creates a more fulfilling visual and audio live experience. Founder and frontman, Coopa'S personal inspiration came from rock 'n' roll greats such as Queen, KISS, Bowie, Prince, Motley Crue, and Marilyn Manson for their visual showmanship as well as many of the great bands of the '90s era, for their song writing. Coopa honed his guitar skills over the years which made him a well-rounded musician and songwriter you hear today. Nominated for best in Maine 2014 by the New England Music Awards and winner of 2015 best hard rock/ metal band, and nominated again for 2016. Winner of Chaos Zyne's Honorable mention awards 2016 for best vocalist/Best guitarist/best hard rock band, best fan favorite. Nominated for best hard rock band & best new artist for the 2017 Portland Music Awards. Nominated for best International Band 2015 by TBFMOnline out of the United Kingdom. Nominated in 2019 New England Music Awards for Best in State and in 2021 for best live act of the year. The band has rocked such notable events as Daytona Bike Week, Laconia Bike Week, Windham Tattoo Festival, Rise Above Fest. Rock the block Fest & The Jersey Shore Fest to name a few. Sygnal To Noise has set the wheels in motion to bring rock music back to its rightful prominence. With 3 CD releases to their credit, Sygnal To Noise's music is streamed and sold worldwide and has performed regionally in the north eastern United States with KingsX, Sebastian Bach, Warrant, L.A. Guns, Lita Ford, Bret Michaels, Saving Abel, Saliva, Powerman 5000, Winger, Puddle Of Mudd, Trapt, Buckcherry, RED, Days Of The New, Avenged Sevenfold, Volbeat, Seether, Alter Bridge, Disturbed, Killswitch Engage, KYNG, Hellyeah, Trivium, Scott Stapp, FLAW, 3 Years Hollow, Soil, John5, Black Stone Cherry, Disturbed and many others. Sygnal To Noise's music keeps spreading and they look forward to bringing their music to YOU.

Frontman Coopa Covered in Tattoos Delivers like No Other, and the band is Top Notch