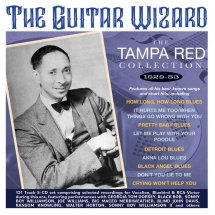 Hudson Whittaker, better known as Tampa Red, was a hugely prolific and influential blues guitarist, singer and songwriter, an innovative slide guitarist and the first black musician to play a National steel-bodied guitar. Moving from Florida to Chicago in the 1920s, he started recording in 1928 with Thomas Dorsey, playing in a hokum style as well as blues, over the years incorporating a pop-oriented style with The Chicago Five. Playing electric guitar from the 1940s working with Big Maceo Merriweather, he influenced musicians like Big Bill Broonzy, Muddy Waters and Elmore James, as his Chicago home became a centre for the blues community. This great-value 121-track 5-CD set comprises selected recordings from the 300 and more titles he released during this era on the Vocalion, Bluebird & RCA-Victor labels, as Tampa Red, Tampa Red & Georgia Tom, Tampa Red's Hokum Jug Band and Tampa Red And The Chicago Five, referred to on many of his record labels as "The Guitar Wizard". It features his R&B Top 10 hits "It Hurts Me Too/When Things Go Wrong With You", "Pretty Baby Blues", "Let Me Play With Your Poodle", and "Detroit Blues", and many well-known songs that were precursors of rock 'n' roll. It features performances with Black Bob, Sonny Boy Williamson, Joe Williams, Big Maceo Merriweather, Blind John Davis, Ransom Knowling, Walter Horton, Sonny Boy Williamson II and others. It's a substantial overview of a key quarter-century of his career, and an entertaining showcase for one of the most significant personalities in the genre.