What Was Once Lost, Is Now Found... TELEVISION''S LOST CLASSICS ARE COMING 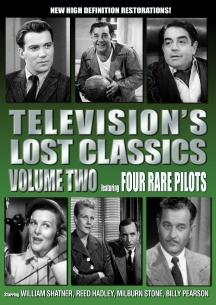 This is a special series of lost classic programs from the Golden Age of TV. The series has been restored by SabuCat Productions from the best archival film elements available in high definition, some of the programs have not been seen since they were originally broadcast. Volume Two contains 4-rare 'Pilot' episodes. The first Pilot titled "Case of the Sure Thing" introduced the series Racket Squad, which lasted for 3 seasons and was nominated for 2 Primetime Emmys. An interesting side-note, reportedly, this program may have inspired parts of the 1973 hit movie, "The Sting". It was first broadcast on CBS on Thursday, June 7, 1951, and starred Reed Hadley as Captain Braddock and was written by Arthur Orloff. The second Pilot titled "Cool and Lam," a light-hearted, detective yarn featuring characters first created by Erle Stanley Gardner. Bertha Cool runs a detective agency and Donald Lam is her junior partner, hence "Cool and Lam". Directed by Jacques Tourneur! The third Pilot is a really rare treat, "The Life of Riley," which starred Lon Chaney, Jr. as Chester Riley! This stand-alone episode was produced in 1948 but by the time the first season went into full production in 1949, Chaney had been replaced by no less than Jackie Gleason! The fourth Pilot, "Nero Wolfe," based on characters created by Rex Stout, is another one-off production. Kurt Kasznar is Nero Wolfe, with future mega-star, William Shatner, co-starring. The story deals with the mysterious death (coincidently) of a rocket scientist. Included on the disc is a bonus CBS Blooper Reel for the long-running "Gunsmoke" series, hosted by James Arness.

A rather enjoyable collection of rare television, with surprisingly solid technical merits. Recommended.