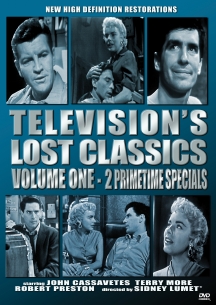 This is a special series of lost classic programs from the Golden Age of TV. The series has been restored by SabuCat Productions from the best archival film elements available in high definition, some of the programs have not been seen since they were originally broadcast. Volume One contains 2 one-hour dramatic programs that feature John Cassavetes. The 1950s was a treasure trove of live dramatic programs originating from New York. Top talent from stage and screen were retained for both in front and back of the camera. These two prime examples convey the feeling of watching a Broadway performance, but with the advantage of abundant and intimate close-ups and medium shots. They are surprisingly cinematic, especially considering the impediments those behind the camera had to face - clunky cameras, hot lights, quick set changes, live music and sound effects and always being mindful of keeping microphones out of the frame. Clearly, the highlights of these programs are the intense performances by John Cassavetes, with his variation of method acting displayed in full form. The first program is titled "Crime in the Streets" and is from The Elgin Hour (Elgin watches) and was broadcast live on ABC, Tuesday, March 8, 1955. It was written by Reginald Rose and directed by Sidney Lumet, starring Robert Preston and a very young John Cassavetes. The second program, "No Right to Kill," was part of the Climax! Series and was presented by the Chrysler Corporation. Based on Dostoyevsky's "Crime and Punishment," and adapted for TV by Victor Wolfson. It was broadcast on CBS, Thursday, August 9, 1956, and starred John Cassavetes. Nostalgia buffs will enjoy the original commercial messages that are included in the episode, along with a bonus blooper reel from the "Defenders" and "The Nurses" series.

Look and sound incredibly good for programs that are over 60 years old. They're like time capsules from the past, capturing the mood and mannerisms of a world that no longer exists. They deserve to be discovered and enjoyed by new audiences, and thanks to this fantastic new home video series, they just might.