On Halloween Night the Legend of The Barn Awakens. 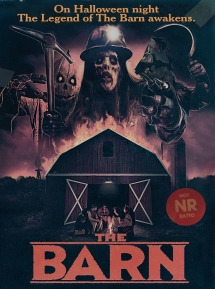 It's Halloween 1989 and best friends Sam and Josh are just trying to enjoy their last "Devil's Night" before graduating high school. Trouble soon arises when the two pals and a group of friends take a detour on their way to a rock concert, finding an old abandoned barn and awakening the evil inside. Now it's up to Sam and Josh to find a way to protect their friends and defeat the creatures that lurk within The Barn... The film stars Mitchell Musolino, Will Stout, Lexi Dripps, Cortland Woodard, Nikki Darling, Nickolaus Joshua with Linnea Quigley (Night of the Demons and Return of the Living Dead) and Ari Lehman (the first Jason Voorhees from 'Friday the 13th'). Featuring an original score by Rocky Gray the former member of Grammy award-winning goth/rock group 'Evanescence'.

A love letter to monster movies and the campy decade where they reigned supreme, that's as fun as it is bloody.

The Barn takes the viewer back to '80s cinema... it is certainly entertaining, and those looking for a retro '80s styled film that feels authentic, it is near flawless.

Succeeding where other movies of this type have let me down, it is very nearly the perfect '80s homage... With an excellent visual style, THE BARN is a really fun movie that harkens back to the '80s glory days in a wonderful way.

—Cody Hamman, Arrow in the Head

To everyone looking for a fun, retro trip back to the days of grainy, low-budgeted horror yanked directly off the racks of your local video rental shop - this one will sit firmly entrenched in my top 5 of the best horror films for 2016.

Has everything a great hack n' slash should have - a back story, wonderful villains, great kills, effective scares and a ghoulish sense of humor.