Vincent Price stars in this spooky thriller about a down­trodden country estate that becomes the site of a horrific murder. 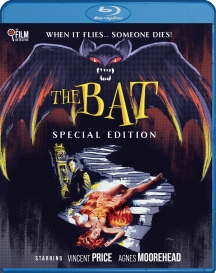 The predator has steel claws and rips his victims to shreds! But who is he? Vincent Price (House of Wax, The Last Man on Earth), stars in this thriller about a down­trodden country estate that becomes the site of a horrific murder. Prolific writer/director Crane Wilbur (He Walked by Night, Crime Wave) helms this feature, with a cast that includes Agnes Moorehead (Bewitched) Gavin Gordon (Murder by Invitation) and in her last film role, Darla Hood of the Our Gang comedies. This gallery of weirdoes is guaranteed to give you the creeps. Which of them is the mysterious killer known as "The Bat?" You'll find out soon enough. But beware - the scream you hear may be your own!

While it's all done in a by-the-numbers manner, there's more than enough here to entertain whodunit fans.