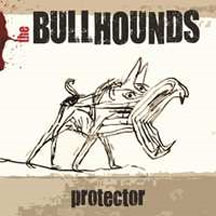 With a cast of internationally renowned musicians, The Bullhounds are set to be one of the purest rock'n'roll explosions of the year. Their first record - 'protector' - was made in a frenzy of friendship and fun, and it is out in March 2015. It is a stellar lineup, The Bullhounds are providing for their first release. The band consists of Sheryl Crow guitarist Peter Stroud, three former members of Southern rock legends Georgia Satellites and Danish business entrepreneur and music aficionado Erling Daell. The Bullhounds have the crispness of The Black Crowes, Neil Young & Crazy Horse and the unspoiled energy of The Hives and Ramones. The Bullhounds are: Peter Stroud - guitar (Sheryl Crow, Pete Droge & The Sinners) Mauro Magellan - drums (Georgia Satellites, Dan Baird & Homemade Sin) Rick Richards - guitar (Georgia Satellites, Izzy Stradlin) Keith Christopher - bass (Keith & the Satellites, Dan Baird & Homemade Sin, Kenny Wayne Shepherd) Erling Daell - vocals "protector" is produced by Jeff Bakos, Peter Stroud, Mauro Magellan & Erling Daell.

Watch Music Video for "Make It" »

The Bullhounds' debut record Protector is an easy candidate for a spot on any critic's list of the year's best new rock records.

This is about as pure a rock and roll album you are likely to hear this year.