The Bump Band - Our Music

A 1983 R&B gem from Kansas City's master of Funk, Bump Funk and The Bump Band. 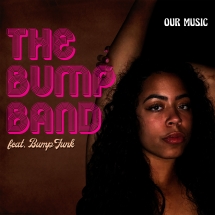 Jerald Scott (known as Bump Funk) and his bands were a legend in the Kansas City soul music scene from the late 60's to the early 80's electrifying crowds across the country with live performances that rivaled the largest names of the era. From his bands "Bump and the Soul Stompers" to "Unnatural Funk" to "The Bump Band" to the "Bad News Band," there was one constant...they were bringing the FUNK! When his early bands broke up, it left Bump with a longing to get back on the stage. He loved performing live and energizing crowds so he decided to assemble a new band made of musicians that had his same talents and passions..."The Bump Band." The band was comprised of some of the greatest musicians ever assembled. On guitar was Robert "Snookie" Clarkson and Robert Kelly (base). Herman "Hammer" Lacy was on drums with Terry "Grim" Grimmett on sax and Bump on Keyboards. All of the members provided vocals along with vocalist Wanda Byrd. During their time together, each of the band members put together their song ideas to come up with the album which is why it is titled "Our Music." This album was originally recorded in 1983 at Bump Funk Studios but was never released due to various circumstances. The original recordings were lost over time (like most of his music) and recently discovered in Bump's attic. Bump's son, Jeremy Scott, let the executives at LotusPool Records listen to the music and it was undeniable that it had to be shared with the world. Although the original analog recordings were damaged, the music has been digitally remastered. This album being released is a dream come true for Bump and the band and a loving tribute to the band members no longer with us (Herman, Terry and Wanda). We hope you enjoy the vibes of an amazing era of soul! "We are The Bump Band...and we're coming to your town. Everybody get ready, cause we're gonna get down!"