Killing a Man is One Thing...Loving His Wife is Another! 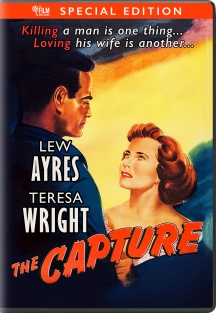 From writer Niven Busch, the author of Duel in the Sun, comes an equally torrid sizzler, loaded with the intrigue and passion that marked the golden age of cinema. Cast with strong performers, this story of guilt and forbidden love still packs a jolt. Injured and on the run from police, Lin Vanner (Lew Ayres) confesses the sordid details of his life to a priest, which includes the death of a man he'd turned over to the police. Vanner also reveals that he fell in love with the dead man's widow (Teresa Wright), only to have his past catch up to him. Haunting and offbeat, The Capture (1950) was directed by one of Hollywood's best, John Sturges (The Great Escape).

The Capture is an offbeat drama, with psychological overtones, that plays off against the raw and rugged background of Mexican locales. Picture kicks off with a wallop ... Ayres and Teresa Wright are very capable in the lead characters, adding to the general realism.

If you love Film Noirs as much as I do this gorgeously restored version of 1950s The Capture is a must own for your Blu-ray collection.

To me, it was a thoroughly enjoyable and most interesting film, and although there have been objections against the ending over the years, I felt the opposite about it, just like an old thriller veined with intrigue, along with a turn of unexpected and yet quite natural character.

The new disc is most welcome and comes highly recommended not just for the new transfer, but for the wonderful new supplements, as well.