An aging actress (Robin Wright) decides to take her final job: preserving her digital likeness for a future Hollywood 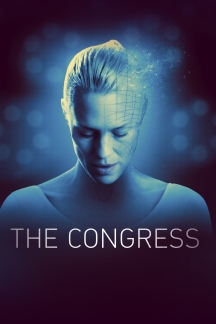 An aging actress (Robin Wright) decides to take her final job: preserving her digital likeness for a future Hollywood. Through a deal brokered by her loyal, longtime agent (Harvey Keitel), her alias will be controlled by the studio, and will star in any film they want with no restrictions. In return, she receives healthy compensation so her digitized character will stay forever young.

The Congress is part live action and part Ralph Bakshi fever dream, but all nightmare. It paints a vision of the future where individuality and anything resembling free will is supplanted by delicious chemical cocktails and a candy-coated reversal.

This is an extraordinary film, a unique film, the kind of film that reminds us of the true power of science fiction to comment on our society.

—Mattie Lucas, From The Front Row