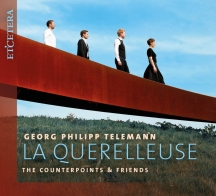 Early music ensemble The Counterpoints truly began in 2011 when recorder player Thomas Triesschijn and harpsichordist Aljosja Mietus began playing together as a duo. The two have performed in European chamber music series and festivals, sharing a special interest in the contrapuntal music of J.S. Bach and the interplay of their musical voices. By 2015, Thomas and Aljosja began to think bigger. They envisioned a group with core members but flexibility in instrumentation, to explore an even wider range of repertoire and colours. They then began to perform with cellist Petr Hamouz, violinist Matthea de Muynck and guest musicians as The Counterpoints. The Counterpoints, all recent graduates of the Royal Conservatoire of The Hague, The Amsterdam Conservatory and University of the Arts Utrecht, have performed together internationally across Europe, and competed as finalists in the York Early Music International Young Artists Competition and the göttingen händel competition. Their most recent engagements have included performances at The Royal Concertgebouw Amsterdam, the International Chamber Music Festival Utrecht, Grachtenfestival Amsterdam and Bachfestival Dordrecht, and appearances on Brava TV, NDR Kultur, NPO Radio 4 and BBC Radio 3.