The Crash That Took Me - Orchestrated Kaleidoscopes 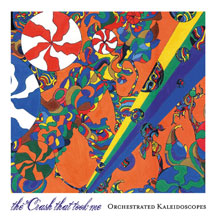 The Crash That Took Me's debut record, Orchestrated Kaleidoscopes, is a colorful blending of sounds brought together to create an abstract pop record. Full of layered textures mixing fuzzed-out guitars and orchestral instrumentation, Orchestrated Kaleidoscopes is lyrically and musically based on the relationship between color and music. The Crash That Took Me expands their experimental pop into a sonic wall saturated with reverb and a sprinkle of psychedelics to weave a tapestry of visual imagery. Notable influences include Roller Skate Skinny, early Mercury Rev, the psychedelic stages of The Kinks and Velvet Underground, topped off with Jon Brionesque celesta solos. Many guest appearances have contributed to Orchestrated Kaleidoscopes, including Brandon Carr (The Earlies) on vocals, Kris Youmans (The PAper chAse) on cello, Ryan Fitzgerald (Polyphonic Spree) on guitars, and others.