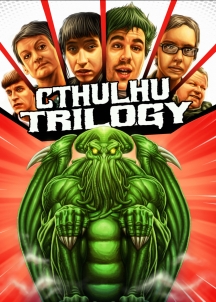 Three features: WHY HANS WAGNER HATES THE STARRY SKY CORDELIA'S CHILDREN ZECKENKOMMANDO VS. CTHULHU WHY HANS WAGNER HATES THE STARRY SKY Hans Wagner lives in a small apartment, taking pills and drinking whiskey to fight his anxiety disorders. When he runs out of both his drugs one day, he has no choice but travel to the supermarket sober. An unexpected adventure begins. CORDELIA'S CHILDREN Cordelia has recently killed her hapless husband to stay in charge of her familial empire of crime. Bummer: Now, he haunts her. Meanwhile, her 16-year-old son falls in love with one of the young callboys working for his mother, shortly after discovering a strange door to a nightmare dimension in the basement. Cordelia's older daughter couldn't care less about all this: She's plotting revenge against the murderers of her beloved father - And she definitely suspects her mother to be the culprit. ZECKENKOMMANDO VS. CTHULHU Lower Saxony's most hardcore punk band faces off against the forces of evil summoned by their small town's elites in a found footage extravaganza!