The Day Of Destruction

Our fate lies within us... 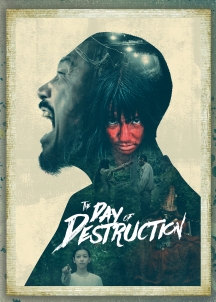 A girl finds an old handgun in her attic and the symbolic object conjures a mystical scene of samurai gathering within the moss-grown location of Kasosan Shrine in Tochigi Prefecture. Jump to winter time, and a man is investigating a mysterious monster that was found deep in a rural coal mine seven years earlier. Since that time, a mysterious plague has spread through the nearby small town, inflicting the residents with a strange mental illness. A young Shugendo, missing for some time, suddenly resurfaces, transformed, intent on exorcising the world from the monsters haunting it. Directed by indie auteur Toshiaki Toyoda ("Blue Spring").

4.5 out of 5 stars, 'One of the first visceral films that's emerged from the COVID-19 era, it's a frenetic mixture of sound, vision and fury that is impossible to be apathetic about.'

'. It's raw, primordial and unfiltered emotion, an audiovisual experience that gripped me from the very first frame and didn't let go until long after the final credit had faded from the screen. My kind of cinema.'

With Day of Destruction Toyoda does not only offer a truly pleasing audiovisual experience but also a powerful poetic exploration of the ills of Japanese society and the need to change it for the better.

Toyoda's Day of Destruction is shot in exquisite monochrome colours as well as in colour.

But as with his previous films, Toyoda's cinematic prowess is quite something to behold.

Day of Destruction slams audiences with its timely message

The Day of Destruction is a strong affecting wail of a movie begging us to notice the world around us and take action to make it a better place before it is too late.