A snapshot of the days when musicians could really swing! 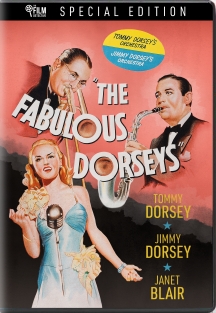 The Dorsey Brothers portray themselves in this rollicking musical biography. The Fabulous Dorseys follows Tommy and Jimmy from their upbringing in Pennsylvania to their great successes in the music business. Director Alfred E. Green (The Jolson Story) uses the film as a showcase for the tunes that charmed a generation, including 'I'm Getting Sentimental Over You' and 'Tangerine.' Janet Blair (My Sister Eileen) appears with the Dorseys, while jazz buffs will enjoy cameos by Paul Whiteman, Helen O'Connell, and other stars of the day. The film's undeniable highlight is a jam session featuring the Dorseys and piano legend Art Tatum, guaranteed to get your foot tapping!

Thanks to great music and great singing 'The Fabulous Dorseys' is still an entertaining movie.