A freak electrical storm engulfs the USS Nimitz, hurtling it back in time to December 6, 1941, mere hours before the Japanese attack on Pearl Harbor. 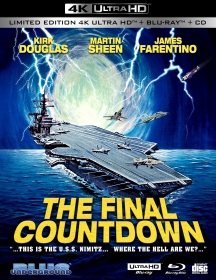 The time is now. The place is aboard the U.S.S. Nimitz, America's mightiest nuclear-powered aircraft carrier on maneuvers in the Pacific Ocean. Suddenly, a freak electrical storm engulfs the ship and triggers the impossible: The Nimitz is hurtled back in time to December 6, 1941, mere hours before the Japanese attack on Pearl Harbor. As the enemy fleet speeds towards Hawaii, the warship's Captain (Kirk Douglas), a Defense Department expert (Martin Sheen), a maverick Air Wing Commander (James Farentino) and a desperate Senator in the Roosevelt administration (Charles Durning) must choose between the unthinkable. Do they allow the Japanese to complete their murderous invasion, or launch a massive counterstrike that will forever change the course of history?

Katharine Ross and Ron O'Neal co-star in this spellbinding sci-fi action hit filmed on location aboard the U.S.S. Nimitz with the full participation of the U.S. Navy and the ship's crew. Now Blue Underground is proud to present THE FINAL COUNTDOWN in a stunning new restoration, scanned in 4K 16-bit from the original 35mm camera negative, with Dolby Vision HDR and Dolby Atmos audio, for the ultimate in explosive home theater excitement!

A FANTASTIC TALE... Intelligent And Entertaining!

HIGHLY RECOMMENDED... One Of The Coolest Movies I've Seen In Quite Some Time!

Captivating, Exciting, And Wondrous Filmmaking That Poses One Of The Ultimate 'What If' Scenarios Of Our Time!

The new 4K restoration of Don Taylor's THE FINAL COUNTDOWN is absolutely incredible. I had very, very high expectations for it and they were all met. It is just an all-around astonishing upgrade that will remain the definitive presentation of this very entertaining but also quite thought-provoking film. If you enjoy the film, place your pre-orders now because after the 4K makeover you will have a brand new experience with it. If you are pre-ordering from overseas, you will be happy to hear that the 4K Blu-ray and Blu-ray are both Region-Free. VERY HIGHLY RECOMMENDED!

...you've absolutely never seen this film looking better... I can honestly say that I never expected to see THE FINAL COUNTDOWN released in 4K. So the fact that it's here on Ultra HD is a minor miracle, made all the sweeter by the disc's fine A/V quality and by the fact that it's so comprehensive you can safely retire any previous version you may own. It's abundantly clear that the team at Blue Underground loves this film as much as we do here at The Bits, and we salute them for it. Not even Mr. Einstein could do better! Highly recommended for fans!

Blue Underground comes through with another fantastic 4K release. This is how catalogue releases should look (and sound) on 4K Ultra HD. Highly recommended!

THE FINAL COUTDOWN holds up well... Blue Underground has done an amazing job on the audio, the video, and the extras for this 4k release and if you're a fan of the film you owe it to yourself to add this to your collection asap. Blue Underground may not have added any new extras to the disc (though the CD and booklet are a nice touch) but the presentation of the feature really is top notch!

Blue Underground's new 4K edition is the ultimate edition of the film, offering a nice-looking new restoration from the original 35mm camera negative, plus all previously available bonus material and then some. This is a must have for fans of the film, the U.S. Navy and time travel stories in general.

Blue Underground releases are exactly the type collectors crave and this is yet another fantastic package I highly recommend. The 4K video quality is unrivaled and the efforts made to retain bonus features, and even place them on the 4K disc, show the kind of detail and care that goes into these editions.

Blue Underground has hit it out of the park again... Color depth looks incredible, as does the natural film grain overlaying the picture. Even when there are fluctuations in the picture because of the special effects work, there's a terrific and filmic balance to the presentation.

Blue Underground's new 4K release is a thing of beauty. They've scanned/restored the picture with fantastic results and gifted it with a kick-ass Dolby Atmos audio as well. The film itself is still great fun too as Kirk Douglas, Martin Sheen, and James Farentino struggle with the moral implications of their situation.

Among the best time travel movies ever made... Another beautiful effort from Blue Underground, delivering a pristine 4K scan dripping with detail!