The Fundamental Gilbert And George

A portrait about the worldwide known London-based eccentric artist duo Gilbert and George. 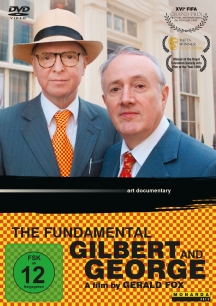 This BAFTA, RTS and FIFA winning film enters the world of Britain's most eccentric, celebrated and controversial artistic double act in which life and art are inextricably linked. The film explores their history from their student days at St Martin's in the late sixties to their early success as living sculptures, their postal art and drinking works to their large scale pictures, following the unique creative process of their Fundamental Pictures depicting their own bodily fluids. We see their daily life at home in Fournier Street, around the East End where they perform unique performances for camera with specially painted faces and a relationship between two special artists who know how to combine their charm with extraordinary performance. The producer Gerald Fox presents a portrait of two individuals who revolutionized the art scene in a very special way.

The two free spirits, as Gerald Fox showed in his wonderfully off-beat fi lm, were simply ahead of their time, crashing through stereotypes and overturning taboos.

The film, however much you laughed, was both intriguing and strangely seductive.