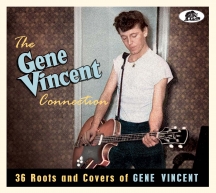 To mark the 50th anniversary of Gene Vincent's death, this unique compilation of originals and rare cover versions of classic Gene Vincent tracks will be released!

This edition in Bear Family Records®' 'Connections' series presents the songs in chronological order - and as Gene Vincent recorded them.

With 36 interpretations from 1952-1966, we show the influence of 'Mr. Be-Bop-A-Lula' on the international music scene as well as artists who gave Gene Vincent their masterpieces!

Among them we count a whole series of famous peers such as Bobby Darin, Kay Starr or Jerry Vale.

Many rarities are among them like an extremely rare live recording of British artist, Wee Willie Harris, and The Voices, an almost unknown group.

The 36-page color booklet contains the story on the subject, written by well-known music journalist Bill Dahl, with many often rare photos and memorabilia!

Gene Vincent's stage show, especially with the Blue Caps, was extremely energetic and simply sensational. While the band swept across the stage, Gene (handicapped in the leg by an accident) was ''tied'' to the microphone stand. His cat-like movements around the mic stand and a song with just that title made him the 'Cat Man'. This was further solidified when Gene began performing in black leather in 1960, copied from the British Vince Taylor, who is also represented here.