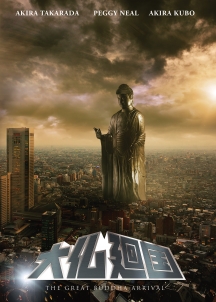 A gigantic statue of Buddha awakens and goes on a trek across Japan while the world watches in awe. Featuring an all-star cast of beloved actors from kaiju cinema's history. A modern day reboot of the long lost, and quite possibly first daikaiju film, classic Daibutsu Kaikoku (1934), this is a must-see love letter to kaiju cinema.