NOTHING IS WHAT IT SEEMS. 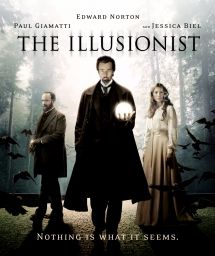 Set in early 20th-century Vienna, a stage magician (Edward * Norton) uses his magic to win back the great love of his * life (Jessica Biel) from a brutal enemy, her fiancee (Rufus Sewell), who is also the powerful crowned prince of * Austria.

With exquisite performances (Giamatti's, in particular), it leaves you thrillingly hovering, happily uncommitted to any one interpretation.

What (director Neil) Burger and his colleagues have done is to entrance us with a richly acted, beautifully produced story.

Conjures up a world of mystery, romance and suspense

This is a very interesting film from a stylistic standpoint, and the cinematography especially is one of its chief allures. Recommended.