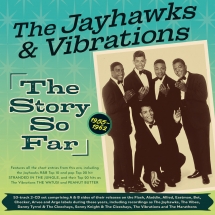 The doowop and pop vocal group which eventually became The Vibrations began life as The Jayhawks, having a 1956 hit with "Stranded In The Jungle", and recording under different names before becoming The Vibrations to have another hit with "The Watusi", and then "Peanut Butter" as they recorded as The Marathons. Their music encompassed pure doowop, along with hard-hitting R&B, rock 'n' roll and novelty pop and "dance craze" songs, as they and their producers searched for the next successful formula. This great-value 53-track 2-CD set comprises A & B sides of their releases on the Flash, Aladdin, Allied, Eastman, Bet, Checker, Arvee and Argo labels during these years, including recordings as The Jayhawks, The Vibes, Danny Tyrrel & The Cleechays, Sonny Knight & The Cleeshays, The Vibrations and The Marathons, and also includes the titles from their Checker album "The Watusi" which were not otherwise released on singles. It features all the chart entries from this era, including the Jayhawks R&B Top 10 and pop Top 20 hit "Stranded In The Jungle", and their Top 20 hit as The Vibrations "The Watusi" "Peanut Butter" as The Marathons. The album is sub-titled "The Story So Far" as they had several more hits beyond the scope of this collection through to 1968. It's a comprehensive overview of their output during this era, and an entertaining collection of recordings that showcase the varied nature of their talent.