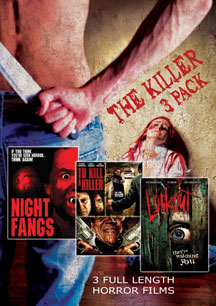 THE KILLER THREE PACK Featuring Three Blood Soaked Killer Horror Films: Night Fangs, To Kill a Killer and Lockout NIGHT FANGS Two Art Teachers are obsessed with eternal youth. Somehow they manage to get Elizabeth Bathory's diary. Soon, they start to practice bloody rituals that end up unleashing hell on earth. Starring: Leslie Frank, Cyn Dulay, Ricardo Islas, Ruby Gonzalez, Andrea N. Winters and Chris Margetis Directed by Ricardo Islas TO KILL A KILLER A retired hit-man emerges from retirement to track down a seemingly unstoppable serial killer. Soon the hit-man, his equally dangerous wife, and their innocent daughter become the vicious sychopath's next target. Starring: Jorge Reynoso, Dominic Capone and SalomÃ³n Carmona Directed by Ricardo Islas LOCKOUT is the story of an American man who gets fired when he fails to adapt to certain changes in the company where he's worked for over ten years. As a result of this, he and his family are forced to move to an old house in rural Wisconsin, where bizarre events will gradually turn their lives into nothing but hell on earth. Starring: Kris Desautels, Cyn Dulay, Claire Lanay, Max Da'Silva, SalomÃ³n Carmona, Chris Margetis and Ruby Gonzalez Directed by Ricardo Islas

A True Horror Gem, Fans of the Genre will Love this Great Collection of Terror