From legendary director Sam Peckinpah comes the story of two high-powered hitman who are best friends turned enemy's after one betray's the other. 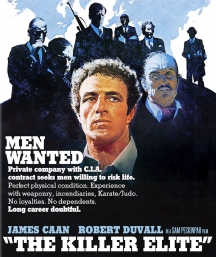 Elite assassins Mike Locken (James Caan, Rollerball, The Godfather, Misery) and George Hansen (Robert Duvall, Apocalypse Now, The Godfather, Hotel Colonial) take on jobs too risky for even the CIA to handle. They're best friends, superior marksmen and on the A-list when it comes to killing. But when one high-powered hitman betrays another, the intrigue, the violence and the thrills become more than just a dangerous game of who-kills-whom first. It becomes a very personal war! Directed by legendary director Sam Peckinpah (The Wild Bunch, The Getaway, Bring Me the Head of Alfredo Garcia). The film also stars Arthur Hill (Future World, The Andromeda Strain, Harper), Bo Hopkins (A Small Town in Texas, Mutant, Midnight Express), Burt Young (Rocky, Amityville II, Convoy), Mako (The Sand Pebbles, An Eye for an Eye, Conan the Barbarian), Helmut Dantine (The Story of Mankind, The Wilby Conspiracy) and Academy Award® winning* actor Gig Young (They Shoot Horses, Don't They?, Game of Death, The Tunnel of Love). Now see this exciting action film in HD!

The Killer Elite is a wild and crazy, late-career actioner from Sam Peckinpah that combined spy plotting, sort-of-insane-kung-fu, bloody shoot-outs, wild car-chases, and seemingly every other genre ingredient under the sun.

It's right in tune with the cinema of paranoia and conspiracy that bloomed in the seventies while also jumping on the martial arts craze with Caan taking on ninja warriors ...