In the Old West, the lucky ones died first. The luckiest were never born at all! 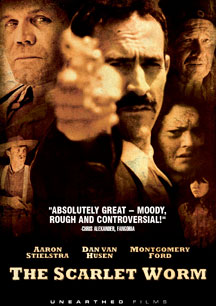 A middle-aged hired gun named Print (Aaron Stielstra) is obsessed with having style and poetry to his assassinations. He has been working with loyalty for his boss, Mr. Paul (Montgomery Ford), for years. But his latest assignment -- the killing of a brothel owner (Dan van Husen) who mandates cruel abortions on his whores -- presents two challenges: he must train a young understudy during the assignment, and he's been told to pull off the killing "quick and dirty" -- which may not leave time for Print's usual, obsessively imaginative methods.

The Scarlet Worm is one of the best low budget independents I've seen in quite some time, regardless of genre. It's bloody and mean, but has a philosophy and a lot of love and skill behind it. Western fans have no reason not to check this film out. There are very few things to complain about here and I recommend it highly.