The Sherlock Holmes Vault Collection from The Film Detective 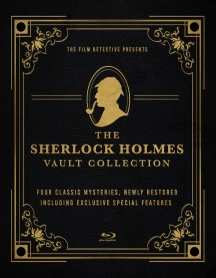 Four Classic Mysteries, all beautifully restored, with exclusive special features make this Vault Collection a must for any Sherlockian.

If you are a fan or know someone whos is a fan of Sherlock Holmes this new Blu-ray set (also available on DVD) from The Film Detective is an absolute must own. We at Classic Cinema Plus give it our highest recommendation.

Each of the four Blu-ray discs included in this stellar set not only includes a newly remaster version of the film, but some very cool bonus features.