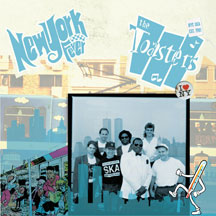 The Toasters album that solidified the "power house" sound. Released in 1992, New York Fever became an instant hit. "History Book" "Ploughshares Into Guns" and crowd favorite "Shebeen"! Album has been remastered from original DAT source during which an unreleased mix of "Night Train" was discovered and has been included on this release for the first time ever! Available on colored vinyl too!