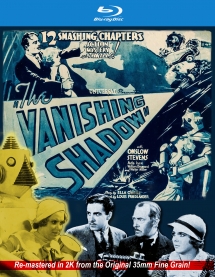 VCI is pleased to present this classic cliffhanger from Universal Pictures, which has never had an official video release on any format, now available for the first time on Blu-ray and produced from the original studio film elements! A 12-episode Universal serial in which a son avenges the death of his father at the hands of corrupt politicians. He develops a wide variety of complex devices in his crusade . . . ray guns, robots and a 'vanishing belt.' Note: The serial features what is believed to be the first appearance of a hand held ray gun in film.