The Women Of Kerrville

The eagerly awaited followup to the best selling album ever from this seminal event, the best in female singer/songwriters at the oldest US festival. 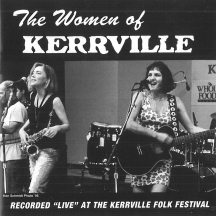 The Kerrville Folk Festival is the oldest American Folk Festival and it is presently considered the most important singer/songwriter festival. The Woman of Kerrville is a collection of well known female singer/songwriters regularly appearing at the festival and recorded off the main stage. It is the best selling album ever from this seminal event.