These Machines Are Winning - Defender 1 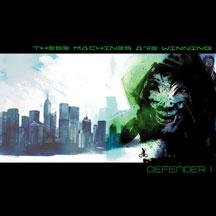 Debut release from this band led by Dylan Silvers ([DARYL], The Crash That Took Me) Silvers has always had a affinity for analog keyboards, the 77 punk scene, and noisy Pixiesesque / Kevin Shields guitar feedback swirl. Defender 1 blends those 3 key elements seamlessly with simple infused analog beats and repetitious pop hooks. Adding Silvers raw yet melodic vocals to make this unmistakably his own, Silvers wields the early post punk energy of bands like the Police, The Clash, Missing Persons, Joy Division, but is also very influenced by the art and production of Brian Eno's ambient undertones and films such as Tron, Close Encounters of the Third Kind, The Crow, Batman, The Watchmen, and artists like Alan Moore, Frank Miller, and John Mueller. Going beyond just the music, These Machines Are Winning takes on a full emersion of creative expression combining narrative film making, photography, and graphic art. The goal is to create a mythos that encourages further exploration of the material. Silvers draws lyrically from this concept, teaming up with long time friend Ryan Hartsell To shoot, direct and co-create with Silvers this comic vision. having the first two cinematic videos out of their four part mini series completed for Defender 1, taking their vigilantes to new extremes. Exclusive cover art was created by acclaimed British comic and movie concept artist Jock. (The Losers, Batman Begins, Man of Steel).