These Machines Are Winning - KURU 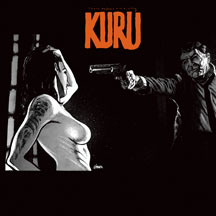 KURU was recorded at multiple studios from all over the USA, but primarily birthed during improvisations at Klearlight Studios in Dallas TX. The core of the album was made using solely vintage analog keyboards and drum machines. Classic keyboards such as the Memory Moog, Arp 2600 , EMS Syth and the 808. Joining TMAW in the studio throughout KURU was Guitarist Phil Karnats (Secret Machines,Tripping Daisy), Austin Jenkins (White Denim), Multi-instrumentalist Rick Nelson (Afghan Whigs, Twilight Singers), Kevin Howard (Bethan), Jay Jernigan (Kaputter), and Producer Dave Trumfio (The Pulsars, Built to Spill, Wilco) is also back to help some mixing and song writing on the LP. Additional mixing by Jimi Bowman. KURU also features an unreleased True Widow track "Moon 1," with Dan Phillips and Nicole Estill who additionally provide lead vocals and guitars on several other KURU tracks. KURU's sound clashes through multiple layers of analog synthesizers with sludgy bass and guitars. Each artist has left their own imprint that makes the album what it is. One of These Machines are Winning's biggest influences throughout the process was Director and Musician John Carpenter. Visually and musically, John's films have made a huge impact on Silvers psyche when composing and putting together this art collective. From a visual standpoint, KURU stretches its theme and influence with cinematic videos that directly and indirectly relate to the source material that is present not only in the comic book, but also in the music. One feeds another in a form of cross pollination. The cover art was done by James O'Barr (Creator of the CROW) who also co-wrote the song Halloween now (Dread Shore) with TMAW. 180 Gram Vinyl with download card.