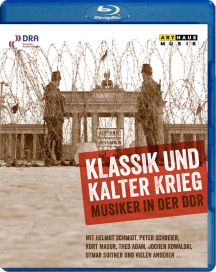 In 1945, after the war had ended, the world split into East and West in political terms. The frontier between the two blocs cut straight through Germany and quickly became a dividing line between contrasting cultural systems. In the Soviet occupation zone, major opera houses and concert halls rose again from the ruins and long-established orchestras and choirs were revived. Once the GDR had been founded, the Socialist Unity Party took over responsibility for cultural affairs and quickly developed the idea of a nation of culture-loving working people in deliberate contrast to their portrayal of Americanized, western capitalists softened by endless consumption”. Together with sport, classical music was used to advertise the merits of the GDR. Like all other areas of art it was instrumentalized for ideological purposes, and its protagonists - provided they displayed the necessary talent and were not regarded with suspicion by the state security service - often enjoyed extraordinary privileges. This combination of art and dictatorship created an environment in which music-making of world quality was able to flourish. Through case studies of individuals who lived under the system, the documentary explores the fates of both the privileged and the non-privileged, and delivers insight into the influence of the political system on artistic life. Thefilm includes interviews with contemporary witnesses both from GDR and the Federal Republic of Germany (FRG).