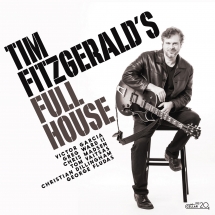 In 2015, Fitzgerald founded Tim Fitzgerald's Full House, a septet with a repertory mission that borrowed its name from one of Montgomery's compositions (and the live album on which it first appeared). Drawing members from the top shelf of Windy City straight-ahead jazz - the vibrant scene that tenor saxophonist Von Freeman called "hardcore jazz" - Fitzgerald turned to folks he's worked with extensively, including the sparklingly inventive pianist Tom Vaitsas and Grammy-nominated trumpeter Victor Garcia, as well as George Fludas, one of the city's greatest drummers and a veteran who has worked with Wes's pianist/vibraphonist brother Buddy Montgomery as well as Mel Rhyne, who played organ with Wes. Working towards this, their eponymous first record, Full House dug in for residencies and one-nighters, cultivating a deep understanding of the material and establishing an approach to Wes quite unlike anything previous. With a "little big-band" vibe that allows them to range back and forth from fulsome arrangements featuring a three-horn and guitar frontline to spare soulful small group sounds.� The results are transformative. It's both a songbook record and an achievement on its own terms. Fitzgerald's genuine love of Wes shines through, but it's not a devotee's slavish re-enactment. Each track crackles and flows with uncorked imagination. It's gorgeously conceived, a program of precise selections culled from the Montgomery archives and thoughtfully rearranged. The record elucidates the way his music could be ultra-hip modern and deep-in-the-soul down home at the same time.